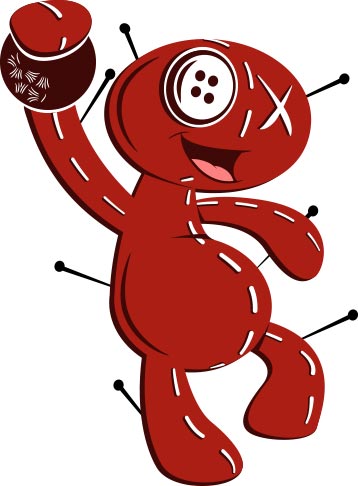 The Official Dodgeball Rulebook Of 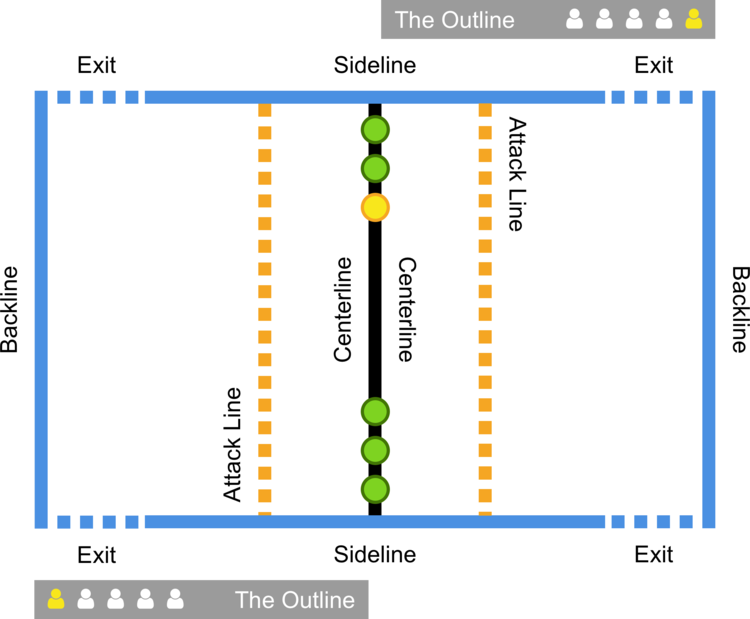 PENALTY: DELAY OF GAME… A delay of game violation occurs when a player attempts to lure a player forward by putting any balls on their side of the court, out of reach of the opponent. RULING: The game is stopped and the ball is awarded to the opposing team. On the subsequent occurrences, all balls will be awarded to the opposing team, and, if the official deems it necessary, may call the violating player out, stop the clock, and/or reset time at the end of a match.

PENALTY: PINCHING… Concerning Rule 2-7-3, a pinching violation occurs when a playing holding a ball grasps it hard enough so that the rubber from one side of the ball touches the other side of the ball. Open hand and clamping grips are acceptable forms of holding the ball. RULING: On the first occurrence, it is recommended that the offending player receive a warning. On the second occurrence, the player is called out. On the subsequent occurrences, the offending player will be called out, and issued a card of which the severity can be determined by the official as deemed necessary. (See Figure 2-2)

PENALTY: TARGETING… Concerning Rule 2-7-10, a targeting violation occurs when an official deems that a player on the court may be intentionally targeting the heads of opposing players, or attempting to injure another player. RULING: The offending player will first be warned, but on subsequent occurrences may be issued a card, of which the severity can be determined by the official as deemed necessary. NOTE: An official may card without warning should it be deemed necessary to do so.

PENALTY: ILLEGAL THROW… An illegal throw violation occurs, concerning Rule 2-7-11, when a player attempts a flight play in a non-sanctioned league. RULING: The player is out, regardless of whether or not the attempt is successful, and the ball they have thrown is considered dead. Neither hits nor catches of this ball count.

PENALTY: INTERFERENCE… Interference occurs when an eliminated player reaches onto the court for any reason. RULING: The ball or balls interfered with will be awarded to the opposing team. The offending player may be issued a card of which the severity can be determined by the official as deemed necessary, only if this is determined to be a recurring issue.

PENALTY: UNSPORTSMANLIKE CONDUCT… Unsportsmanlike conduct occurs, concerning Rule 2-8-1A, when a player has changed places with a person in the line in order to gain an advantage. This is commonly referred to as line jumping. RULING: The game is forfeited and one point is awarded to the opposing team. The offending player(s) may be issued a card of which the severity can be determined by the official as deemed necessary.

PENALTY: ILLEGAL TOUCHING… An illegal touching violation occurs, concerning Rule 2-8-1D, when a player crosses the centerline to shag a ball. RULING: All shagged balls are awarded to the opposing team. If the player that crossed the centerline was an active player, that player is also called out.

SECTION 10: THE END OF THE MATCH

ART. 1… The match is over when the official signals the end of the regulation time period.

PENALTY: DELAY OF GAME… A delay of game violation occurs when an official deems any action taken by a player or players to be deliberately attempting to delay the flow of the game. RULING: The official may disallow rolling balls to the opposing team and/or force the offending player(s) to throw. On the first occurrence, it is recommended that the offending player receive a warning. On the subsequent occurrences, the offending player will be called out, and, if necessary, issued a card. In extreme cases, the officials may grant a short extension of the time period in regulation or overtime play.

ART. 1… Upon injury, a player may remove themselves from play for up to one minute in order to compose themselves and make sure they are still able to physically perform.

Officials and Their Duties

Dodgeball is always played on the honor code. You are responsible for taking your own outs, and you must not have a “stay in until the ref calls it” attitude. Doing so will result in being called out, warned, carded, and sanctioned. Dishonest players will not be tolerated.

SECTION 2: THE HEAD OFFICIAL AND REFEREE

ART. 1… An official or referee is anyone that is assigned to a match by the league manager.

ART. 1… Before the match begins

ART. 2… During the match

Due to the inherent nature of a playoff system, ties are not permitted in the postseason.

ART. 1… Overtime shall be played in the event that a tie exists at the end of the regulation time period.

The purpose of this Code is to establish guidelines for ethical standards of conduct for all officials of the New Orleans Dodgeball Association.

Failure to maintain any standards as mentioned in these rules, may result in consequences as deemed necessary by the New Orleans Dodgeball Association and include but are not limited to the following: